Coffee was first planted in Kenya at Bura in Taita Hills in 1893 and thereafter, grown at Kibwezi, under irrigation in 1900, and at Kikuyu near Nairobi in 1904. In the 1930’s, following the Devonshire White Paper Report of 1923, the Colonial Government allowed controlled planting of coffee outside the European settled areas in Kisii and Meru in particular. By the time Kenya attained its independence in 1963 the Coffee Industry was playing a significant role in the economy by among other things being the leading foreign exchange earner.

above sea level, with temperature ranging from 15 to 24 degrees Celsius, in deep and well drained red volcanic soils with annual rainfall ranging from 900 – 1,200 mm. Approximately 99% of Kenyan coffee is Arabica and the main cultivars are SL 28; SL 34; K7, Ruiru 11, Batian and traces of Blue mountain. 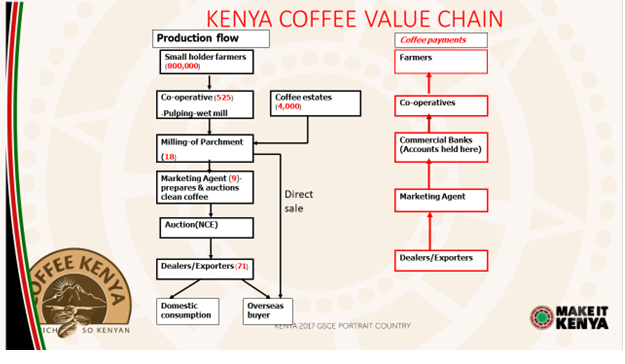